Just getting this thread started. Check back! 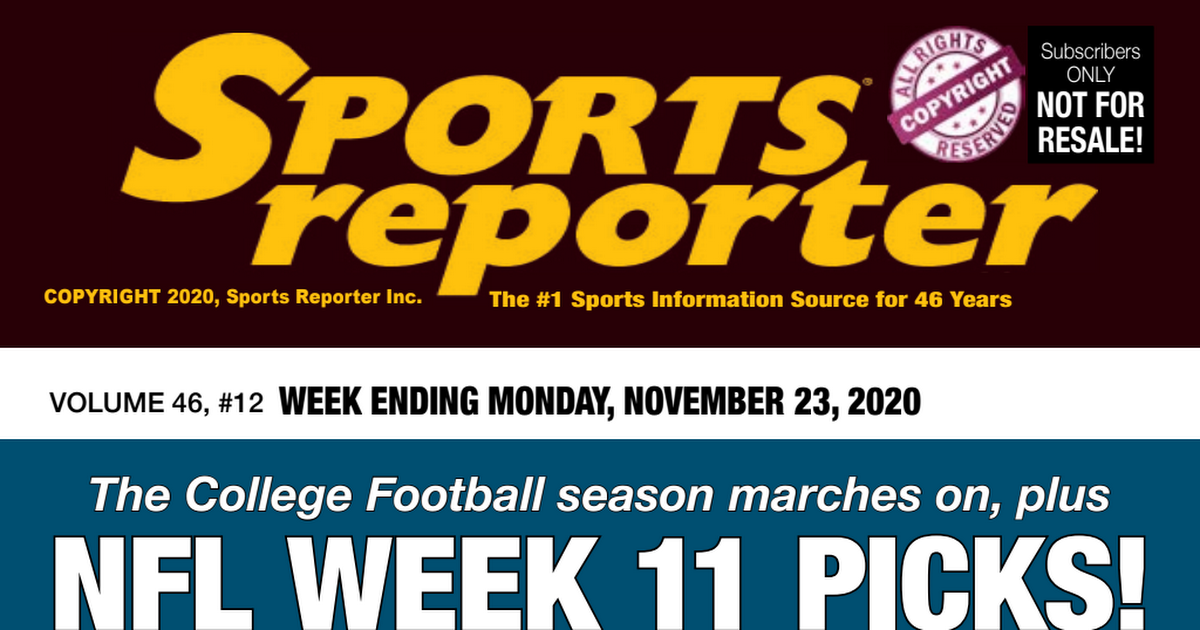 Thanks Mark, I love reading these write-ups to see if there's any value with taking unders. Especially, with the shitty weather we've been having on game days in certain locales recently. You can save a few points by paying attention to the weather.

And it looks like there may be some more of that shit this weekend...

Is anybody else having a problem viewing these?

inZane said:
Is anybody else having a problem viewing these?
Click to expand...

There should not be any problems. I have not heard from anybody else yet. I will check back.

Mark's Moneymakers said:
There should not be any problems. I have not heard from anybody else yet. I will check back.
Click to expand...

I think it may be on my end. When I click on your links, I see a sign in box and when I hit that it wants to verify my google account with a password.

I'll have to ask my wife what that is.

* I figured it out. After I open your link I need to hit the download icon in the top right corner and it comes up. I never had to do that before, sorry to bother you Bro...
Last edited: Nov 18, 2020 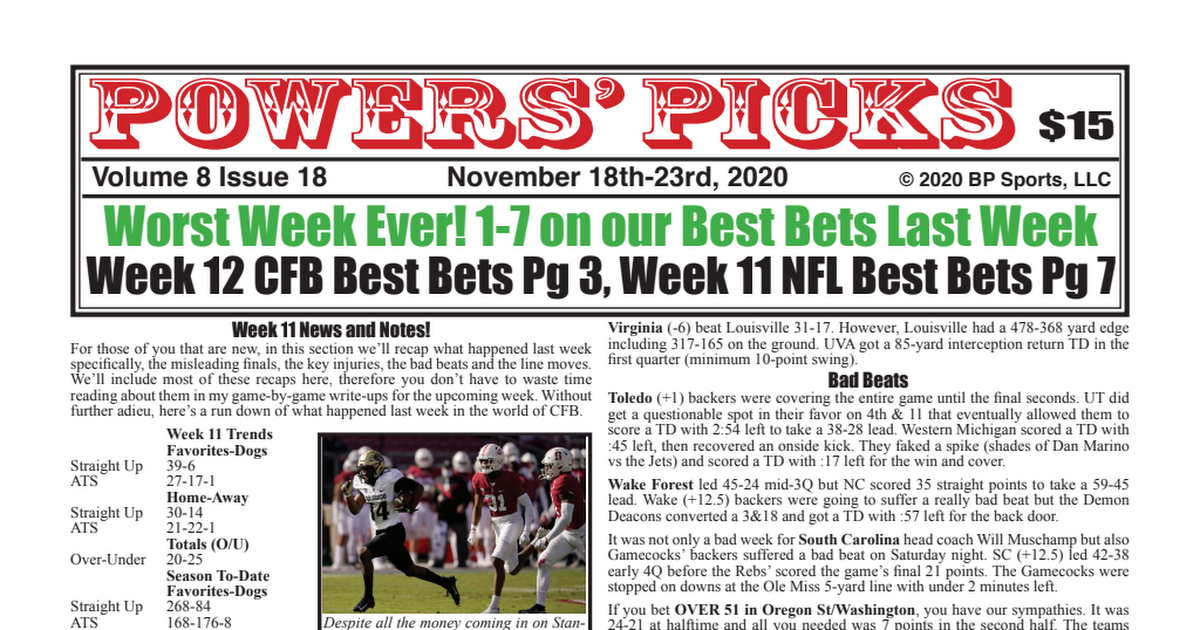 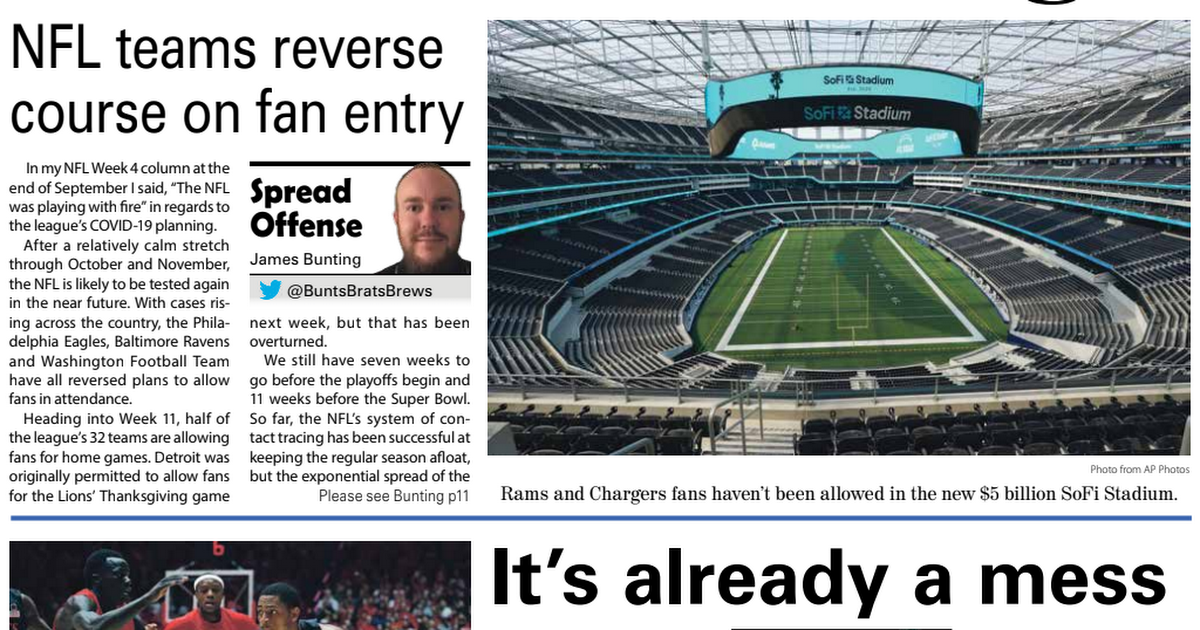 Thanks for taking the time to post these Mark.

I only opened a couple, but they opened fine.

College football is in full swing in 2020, and it's unlike any season we have had before. One thing is familiar, though: "Stanford Steve" Coughlin and Chris "The Bear" Fallica breaking down games as only they can, offering their top bets, nuggets and totals worth wagering on. Stanford Steve hit on three of four picks last week, and he is 21-11 on the season. How will the guys fare this week?
Here is your guide to Week 12 of the season from the two college football analysts. (Games postponed because of COVID-19 have been removed.)
Records

Stanford Steve: Does anyone think Trevor Lawrence is going come back after being out with COVID-19 and Dabo Swinney is gonna tell him to hand the ball off to Travis Etienne? I sure don't. Expect the Tigers to come out for the first time we have seen them since losing in South Bend to Notre Dame and do whatever they want ... looking a lot like they did when they won in Atlanta a couple of weeks ago versus Georgia Tech, 73-7. I'll lay the points with Dabo and the boys.
Pick: Clemson -35 (Clemson 69, Florida State 17)

Stanford Steve: Totally going with the "what have you done for me lately" theory here. Florida scored 65 points versus Arkansas last week, and Vanderbilt scored 35 versus Kentucky. Let's hope they both score that much this week. We'll take the over.
Pick: Over 68 (Florida 51, Vanderbilt 24)

The Bear: According to adjusted defensive EPA, Tulsa's defense ranks one spot higher than Cincinnati, and UCF put up 455 yards on the Golden Hurricane. Yes, the Knights also turned it over three times in a game in which they blew a big first-half lead, but I'm going to trust the UCF offense here to post its fair share of yards and points on a Cincinnati defense that hasn't allowed more than 17 points to an FBS opponent this season. Will it be enough against a Cincinnati offense that has gotten going the past few weeks? Maybe not, but I do think grabbing UCF and the points is the right move here.
Pick: UCF +6

The Bear: You might have missed it, but Mississippi State had just 204 yards and threw for 4.9 yards per attempt against Vanderbilt. If the Georgia D is still motivated, I can't imagine MSU having much success at all against a defense that is third in adjusted defensive EPA. At the same time, MSU's defense is fifth in that metric, and we've seen both Stetson Bennett and D'Wan Mathis struggle against good defenses this season. Even if star WR George Pickens is back, I'm not sure we can expect Georgia to score in the middle to upper 30s, which is likely what will be needed to push this one over the total.
Pick: Under 44.5

The Bear: After a sloppy win over Baylor, expect the Cyclones to handle K-State here in a bit of a revenge game after the Wildcats' defense had its way with Iowa State last year (236 yards allowed, 1-for-13 on third down). It wasn't like the Wildcats did much offensively either -- 288 yards and had a TD on a kickoff return -- and that was with Skylar Thompson at QB. K-State's offense against the past three teams it has faced not named Kansas: 37 drives, four TDs, six turnovers, 15 drives without a first down. Iowa State controls its fate to reach the Big 12 title game, and I don't see any lookahead to next week's game versus Texas in Austin.
Pick: Iowa State -10.5

The Bear: The four best teams NC State has faced have each put up better than 40 points on the Wolfpack, and the NC State running game should have some success versus Liberty. Liberty QB Malik Willis threw for 217 yards and ran for 108 against Virginia Tech in a 38-35 win. Is there any reason not to expect Willis to have a similar type of game here given the amount of damage D'Eriq King did to NC State's defense a couple weeks ago? I'd be surprised if we didn't have another 38-35 type of game here.
Pick: Over 66.5

The Bear: Tulane lost a couple of close contests early, dropped a weird game versus Houston and then was just outmanned by UCF. But the Green Wave have won three straight in which their defense has played much better, and they now face a Tulsa team that has a solid D, is hit or miss on offense and is ripe for a bit of a letdown after a big comeback win over SMU. Feels like a good spot to take the points.
Pick: Tulane +6.5

Stanford Steve: No one has blown me away at the quarterback position more this year than Washington State's Jayden de Laura. The true freshman from St. Louis High School in Honolulu -- the same school that produced Tua Tagovailoa and Marcus Mariota -- has thrown for 548 yards and four TDs in his first two games as a college football player. However, having watched the Cardinal play the past two weeks, the lack of speed in the WSU secondary does not bode well for Nick Rolovich's squad from Pullman. I'll take the points with the Cougs.
Pick: Washington State +2.5 (Washington State 38, Stanford 37)

The Bear: Since a three-interception performance in the opener versus Hawaii, Fresno State QB Jake Haener has been great, putting up an 83 QBR with eight TDs and just one INT. Yes, there's a chance it was a byproduct of playing three of the worst teams in the Mountain West Conference in UNLV, Utah State and Colorado State. But while San Jose State has been a great story, the Spartans are facing the best offense they have seen all season, and their undefeated record is certainly in jeopardy.
Pick: Fresno State +2.5
The Bear's money line parlay

Ranked matchups
• Favorites began the year 14-2-1 against the spread in ranked matchups, but all three ranked matchups on Nov. 7 saw the underdog not only cover but win outright (Notre Dame over Clemson, Indiana over Michigan and Florida over Georgia).
Iowa (-2.5, 47) at Penn State
• This the eighth time Penn State has been a home underdog under James Franklin. Four of the previous seven instances were against Ohio State. The last time Penn State was a home dog to someone other than Ohio State was Oct. 8, 2016, against Maryland.
UCLA at No. 11 Oregon (-13.5, 66.5)
• With an upset win, UCLA would be over .500 for the first time under Chip Kelly. With Kelly at the helm, the Bruins have pulled one upset as a double-digit underdog -- the 67-63 win at Washington State last year as an 18.5-point 'dog.
No. 7 Cincinnati (-6, 63.5) at UCF
• This snaps UCF's 29-game streak in which it was a home favorite. It is the first time since September 2016 versus Maryland that the Knights are a home underdog.
Washington State at Stanford (-2, 64.5)
• Dating back to last year, Stanford has failed to cover in each of the past six games and is 2-11 ATS in its prior 13 contests. The Cardinal have lost six in a row straight up and 10 of their past 13.
No. 14 Oklahoma State at No. 18 Oklahoma (-7, 59.5)
• This is the first time since Nov. 11, 2017, that Oklahoma is a single-digit favorite. On that day, OU beat TCU 38-20 as a 6-point favorite.
• Since 2015, Oklahoma has been a favorite of seven points or fewer nine times in a regular-season game. The Sooners have won all nine games and are 8-0-1 ATS.
No. 10 Wisconsin (-7.5, 44) at No. 19 Northwestern
• The Wildcats have covered five of the past six in the series, winning three outright -- all as an underdog. 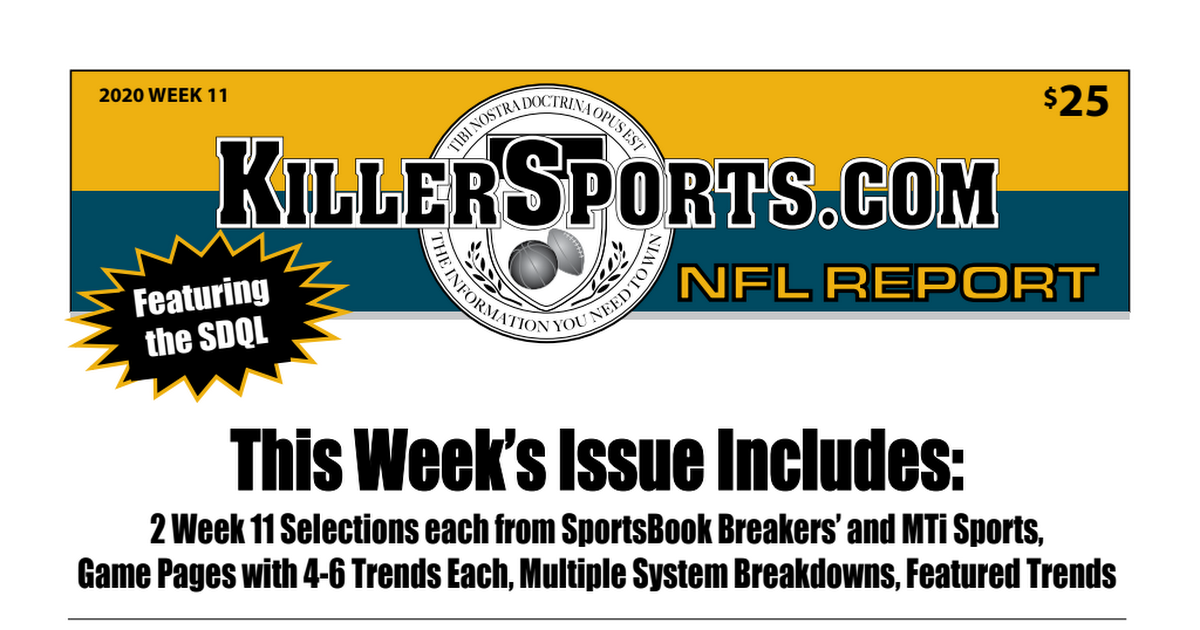 INSIDE THE PRESS BOX -- NCAA

Thanks for all your work on this thread. Much appreciated!

INSIDE THE PRESS BOX -- NFL